All the way back in Alpha, we were graced with Lord of Atlantis, Magic’s first tribal-based creature. This card changed Magic forever, not only by coining the term “Lord” to mean “a creature that gives a stat bonus to other creatures that share a type/attribute with itself”, it also gifted us with a card that is almost perfect in power-level. Lord of Atlantis was never too broken (even though it was templated strangely) but it still lent itself to champion one of Magic’s favorite Modern decks in the format’s history: Fish.

Although this archetype has been mostly phased out within recent years, people still love playing their tribal decks. Wizards of the Coast has recognised that, and graced us with five brand new tribal Lords in Dominaria United which, for the most part, will shape Pioneer tribal decks in a way that has the possibility of creating some brand new archetypes!

Let’s start off with one of my favorite cards in the entire set: Rundvelt Hordemaster. This card may look innocuous, but it’s actually a huge step for Goblin Tribal. This is the first time we have ever seen a two-mana goblin lord before, and it has already begun to reshape formats. If we take a look over at Modern, we see that Rakdos Goblins won the Modern MTGO Challenge on the third of this month, and that same player also came in eleventh place in the next week’s challenge as well. This card’s ability to generate card advantage whenever any goblin you control dies is super useful, and it plays very well with Skirk Prospector, a goblin that allows you to sacrifice it for mana. If we take a look over to Pioneer, we can see that the deck that I have configured looks to take advantage of this synergy as well. 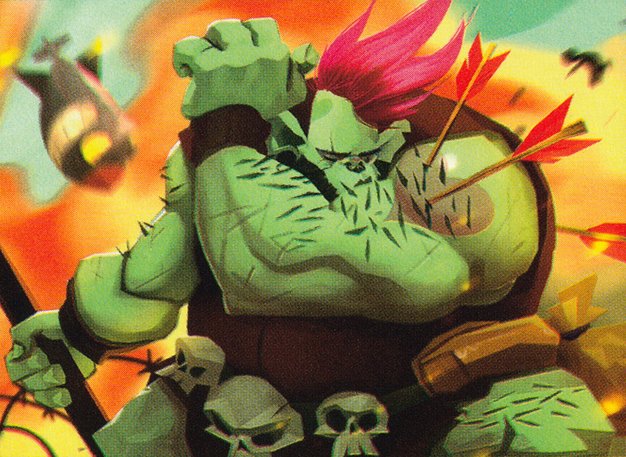 This is a more aggressive version of Goblins compared to its Modern counterpart, but that is actually an upside in this format. Since there’s no infinite-combo available in Modern, we might as well make the most of it by trying our best to go for much faster kills. This deck plays a super low curve, it contains  eighteen one-drops and sixteen two-drops, with a few more three-drops to fill out the curve. This low-to-the-ground aggression has traditionally done well in Pioneer, as we see Mono-Red Aggro, in a multitude of flavors, have success throughout this format’s history. However, one of the things that red decks have been missing for a while is a lord effect, and we see this deck take full advantage of this card. This deck is playing four Goblin Instigator, which while the Hordemaster is in play, creates four power for two mana. This card also synergises super well with Reckless Bushwhacker, a card that other decks are starting to take a greater advantage of as of late. This card plays super well here due to how wide this deck looks to go. Four Goblin Bushwhacker, four Battle Cry Goblin, and three Castle Embereth allow this deck to almost always have a good effect to use to pump your team and allow you to win some sticky combat steps.

Soldiers isn’t really a tribe that has existed outside of Legacy, and even there, it’s not really Soldier Tribal, it’s just Chalice of the Void/Trinisphere Prison with Thalia effects. Now, with the inclusion of Valiant Veteran, we have a real reason to go for the Soldier tribe. However, there’s one big issue with going down this route, and that’s the fact that white tribal decks already have a ton of success in Pioneer in the form of Mono-White Humans, and we have to ask ourselves the question, “Why are White Soldiers better than White Humans?” It turns out that a lot of the playable humans from this deck come from various Innistrad sets, and they LOVED to make their white creatures soldiers. Thalia, Thalia’s Lieutenant, Thraben Inspector, and Brutal Cathar are all both Humans and Soldiers, leading us to having a very good mesh of the two tribes. There are some important things to note about these tribes however, such as how Valiant Veteran himself is a Kor Soldier, not a Human, and how Luminarch Aspirant is not a Soldier (but it was just too powerful to not include in this archetype). While this is obviously pretty anti-synergistic, giving white aggressive decks access to more than four lord effects is not something we’ve seen yet in Pioneer, so it is entirely possible that having some more sub-optimal lords will still allow you to win combat steps much more often than you would have been able to be beforehand. While the Modern version of this deck has a lot of history, there has never really been a competitively viable Merfolk deck to exist in Pioneer. However, this deck has a lot of promise to it due to what colors we want to be playing. Since Ixalan had the merfolk tribe be in blue AND green, we’re basically forced already to splash green, but that’s okay, because this set gifted us with some powerful green cards. Kumena’s Speaker is basically a one mana 2/2 merfolk, Merfolk Mistbinder acts as the lord to this deck, and Deeproot Elite allows us to distribute counters to whatever creature we think will be the least likely to survive an upcoming combat step. These cards, combined with the new Voldalian Hexcatcher allow Merfolk to quickly grow a huge board, while still being able to present some amount of instant-speed disruption.

Despite all of these reasons being good enough as to why we play green in this deck, we cannot forget about Collected Company. This four mana play has single handedly created more entire archetypes than most cards can boast, and it usually is the most powerful thing you can be doing at any point in time in the game. With eight lord effects in this deck now, you have a 61% chance to see at least one lord when you cast this card, in addition to whatever other bullet you need in your situation. If you want protection, we play a Kopala – essentially giving all of our creatures Ward 2. If we want card advantage, Kumena is here to lead our army – by drawing cards and buffing our team with a zero mana investment each turn. While we have yet to see exactly what merfolk will do to this format, it is pretty clear that there is something here. This deck has a great curve, a clean manabase, and a super dedicated playerbase to this archetype, who I’m sure will eventually give us some great results. I may have saved the best for last, because this deck has already managed to put up a few great results. Not only is Twitter flooded with pictures of people 5-0’ing with one of Magic’s most iconic tribes, but people are even having success with this deck in more competitive events.

This version of Elves was created by MTGO user TheTunnelingCat, and it looks exactly like what Magic players have come to expect from a dedicated elf deck. It contains eleven one-mana mana dorks, eight lord effects in the form of Elvish Clancaller, and championed by the newest edition, Leaf-Crowned Visionary. This lord allows you to pay one additional mana with each elf spell you cast to draw a new card, which means you will run out of cards to play in the grindy matchups much less often. In a deck that contains two Circle of Dreams Druid and three Nykthos, Shrine to Nyx, you will never have an issue generating enough mana to take advantage of this new ability.

We have yet another tribal deck here that takes advantage of the raw power of Collected Company, but this one does it a bit differently. Yes, you are able to put a bunch of lord effects into play and attack on the following turn, but this deck also plays four Shaman of the Pack, a card that plays extremely well with Collected Company. This is a pretty efficiently statted creature that enters the battlefield and has the opponent lose equal to the number of elves you control. Since you’re putting more elves into play with Collected Company as this is entering, this will usually deal somewhere between three to seven damage, depending on how long you have managed to sandbag playing it. This finisher is one of the main draws to playing elves, and it seems like this fan-favorite has finally found a home in a deck that leans more towards the competitive side.

Shadow-Rite Priest doesn’t have a home. The cleric decks that tend to exist in Pioneer are Orzhov Angel decks that have an incidental cleric sub-theme. Since the goal of Angel Tribal is to gain life instead of pressuring your opponent, the stat buff from this creature doesn’t really accomplish anything for this tribe. The activated ability on the Priest is interesting, and potentially dangerous, but the big issue is that there are not a whole lot of playable black creatures to cheat into play. It’s just Razaketh and Vilis, but without the black mana acceleration that EDH has such as Dark Ritual and Lotus Petal, it is extremely difficult to take full advantage of these cards in a deck that also wants to play a lot of smaller cleric creatures. Sadly, I don’t think there will be a good shell for this card until a great black finisher is printed (or reprinted?).

Pioneer is the New Modern

Many people reminisce of the days when Modern was filled with a whole slew of viable tribal decks. You could walk through a tournament hall and see Merfolk, Elves, Goblins, Humans, Zombies, Slivers, and more! Sadly, those days seem to be over, as the power-level of Modern rises, and cards like Fury and Solitude make these types of creature-focused synergy decks have much less of an ability to present a fast enough clock.

Thankfully, it seems like Pioneer is becoming a refuge for people who want to play these strategies again, and it’s making this format much more diverse in the process!